As a political asylee from Myanmar, few would think that Sai Kyaw would soon work to become an entrepreneur and the founder of a gateway tea company.

Sai came to the U.S in 1993, but before that he was raised in the fields of a tea farm in the northern part of the Shan State in Myanmar. Even as a child, Sai knew the basics about cultivating and harvesting tea and producing delicious Burmese fermented tea. The family business was already in his blood.

Many years after Sai settled down in America working at various jobs and growing his own family, he decided it was time to spread Myanmar’s little known name to the world. How? With the national dish, which was tea salad.

In February of 2007 , Sai opened a restaurant in the city of Boston, Massachusetts. And called it Yoma. There, to this day he serves traditional, and modern Myanmar cuisine. The biggest hit, was the different, yet amazing tea salad (Laphet Thote). The staple salad of Myanmar was now popular in Boston also, so Sai decided to make a business out of it.

Enter, Yoma Myanmar Tea Company, established in 2013. Sai quickly spread the news of edible tea in Tea Salad – which was now synonymous with Myanmar, all across the U.S in various stores and restaurants. It is also gaining global recognition, but that is a process he still works on every day. Yoma Myanmar Tea was built on spreading the taste and culture of Myanmar, in distributing classic, all natural Myanmar foods, with the main star being the Zayan Pickled Tea, straight from Sai’s family own tea farm located at Namsan, Northern Shan State of Myanmar.

We continue to guarantee providing you with the healthy, unique Myanmar taste in which you cannot find anywhere else. 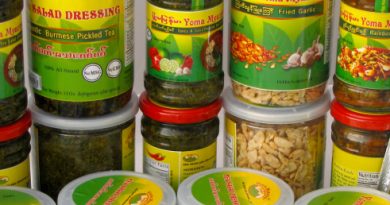